It’s Christmas time, and like most people, I’ve been reflecting on the birth of Christ. As I look at the nativity sets sprinkled around town, my thoughts go to the girl on the donkey with the round belly. 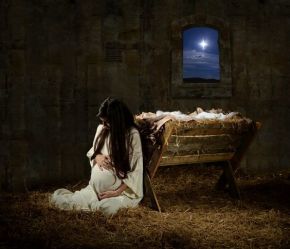 Can you picture it? Mary is full-term and ready to deliver. She and Joseph get into town only to find that there are no vacancies. She’s ridden on the back of a donkey for over 90 miles. Her baby is kicking inside her. Contractions have taken her breath a few times. And her water may have broken while Joseph was trying to find a place to stay.

This was probably the most physically and emotionally draining thing she’d ever done in her short life. Son of God or not, Mary was not exempt from labor pains. Mary still had to puuuuush to get the King of Kings into the world. His divinity did nothing to make this delivery any easier than her future deliveries. (And little did Mary know it, but a little boy was going to stop by and play on a drum for the baby; most likely right after she got Jesus to sleep.)

Delivering Immanuel was probably a great relief to this girl.

The night Christ was born, God reached down to relieve the rest of the world as well.

“Let me get that for you,” He said. Although it didn’t come in a thunderous voice from Heaven; it came as a healthy cry Christ would let out as He filled His human lungs with air for the first time. With the birth of Jesus, God offered to relieve all of humanity from the weight of sin and he offered to take the weight of our yoke and bear it Himself in return for His yoke, which is light.

The wait was over. God was with us.

This is the place where I usually stop. The pregnancy is over! God did the miraculous. In a few days, Christmas will be finished and 2018 will come to an end.

But this isn’t the end. It’s the beginning! The beginning of the end.

Jesus didn’t come to us so our kids could wear sheep and shepherd costumes for Christmas pageants. His birth was the beginning of the endgame in the spiritual battle against Satan.

The baby Mary held in her arms was the revelation of God Himself.

He would be our High Priest, who would sympathize with all the weaknesses of our humanity.

He would be our Intercessor and our Deliverer.

He would be the only perfect sacrifice God could accept.

For God so loved the world that he gave his one and only Son, that whoever believes in him shall not perish but have eternal life. For God did not send his Son into the world to condemn the world, but to save the world through him. (John 3:16-17, NIV)

We can’t look upon the baby king without seeing His sacrifice on the cross.

1 John 3:8 tells us, “The one who does what is sinful is of the devil, because the devil has been sinning from the beginning. The reason the Son of God appeared was to destroy the devil’s work.”

Satan didn’t underestimate the significance of Christ’s birth. He didn’t see a tiny, vulnerable baby wrapped in swaddling clothes. He saw the fulfillment of countless prophesies. He recognized the divinity of Christ and the fruition of God’s infallible word. Satan and his legion can be regarded in many ways, but they weren’t stupid. They’d had free rein for a long time, but their time was up and they knew better than anyone what came next. Jesus’s first cry that night was a battle cry.

Do you hear what I hear?